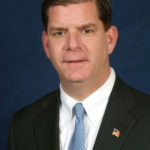 Mayor Martin J. Walsh said raising the wages of union laborers who work on public projects should be part of the national dialogue on income inequality during a panel discussion with the mayors of New York, Baltimore and Seattle.

Walsh praised the Legislature for boosting the state minimum wage to $11 by 2017 before mentioning the “prevailing wage law,” which pays Boston tradesman in the range of $30 to $50 an hour to work on public projects.

“I think we have to look at the prevailing wage law as well to make sure that we give people the opportunity to ... have a living wage,” Walsh said during the “Municipal Strategies for Financial Empowerment” public forum at the University of Massachusetts Boston.

Walsh, a former head of the Boston Building and Construction Trades Council, added, “This isn’t an anti-business conversation, this is a conversation (about) how do we work together to make sure we have equality.”

“If we’re looking at bringing up income inequality, we have to look at everything on the table: living wage, prevailing wage, minimum wage,” Walsh said.

The forum organized by the U.S. Conference of Mayors saw New York Mayor Bill DeBlasio, Seattle Mayor Ed Murray and Baltimore Mayor Stephanie Rawlings-Blake discussing ways to get people out of poverty. Murray said there was no evidence that Seattle raising its minimum wage to $15 by 2017 has hurt business, and cited expansion and relocation in his city by Facebook, tree-harvesting company Weyerhaeuser, and biotech firm Juno Therapeutics.

“The myths just aren’t true — you raise the minimum wage, it actually attracts business,” he said.