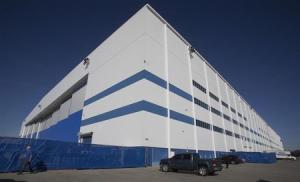 SEATTLE (Reuters) - Boeing Co's <BA.N> largest union on Monday filed for a vote to unionize 2,400 workers at the company's airplane factory in South Carolina, setting the stage for a clash between the two sides in the strongly anti-union state.

The International Association of Machinists and Aerospace Workers (IAM), which represents 35,000 workers at other Boeing locations in the United States, has been organizing for more than two years in North Charleston, South Carolina, one of two sites where Boeing makes its high-tech 787 jetliners.

The IAM did not say how many workers supported the petition, which triggers an investigation by the National Labor Relations Board. The IAM said a vote could come in the next few months, depending on what the NLRB finds.

If the union drive succeeds, it could affect Boeing's ability to move production to non-union workers. For the union, the drive is a test of its ability to hang on to workers.

The union must win a simple majority of those who vote to gain the right to bargain with Boeing, the NLRB said. South Carolina is a "right-to-work" state, one of 23 that prohibit making union membership a requirement of employment.

The IAM said union support stems largely from poor working conditions caused by a succession of factory floor managers at the plant, which suffered production problems last year that affected 787 production but did not stop Boeing from hitting its target for 787 deliveries.

"If there's one issue that's common to everyone, it would be the lack of stability," said Frank Larkin, a spokesman for the IAM.

Boeing said the union would divide workers and noted that the IAM had "aggressively opposed" the factory's very existence by filing an NLRB complaint in 2011 alleging Boeing had set up the plant in retaliation for a machinists strike in Washington state in 2008.

The NLRB filed a complaint against Boeing in the case and in late 2011, the two sides reached a contract deal, prompting the IAM to withdraw its complaint.

"Simply by filing this petition, the same union that tried to take our jobs and our work, has already begun to divide our team at a time when we're just beginning to gel and catch a solid rhythm in production," Beverly Wyse, vice president and general manager of the plant, said in a statement.

The union also criticized Boeing and South Carolina Governor Nikki Haley for criticizing the union's effort to organize, and for forced overtime that rankled workers and drew complaints, prompting changes in Boeing's policies.