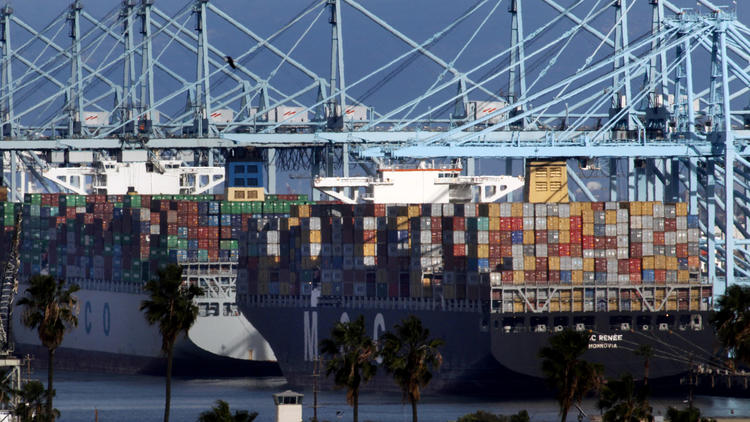 Container ships clog Pier 400 at the Port of Los Angeles as crews work to end the backlog of waiting ships on March 1. The ports of L.A. and Long Beach together are a key hub for international trade through the Pacific. (Los Angeles Times)
NAFTA didn't work out so well; we shouldn't fast-track a sequel
Trade deals have resulted in U.S. jobs being outsourced abroad and Americans' wages going nowhere
Following NAFTA with the Trans-Pacific Partnership is like turning a bad TV show into a terrible movie

This spring, President Obama and Republican leaders in Congress want to use an outdated process used to pass the North American Free Trade Agreement more than 20 years ago — a rule called “fast track” — to force through trade deals without a real debate or any amendments. And fast track would be used to speed passage of the giant Trans-Pacific Partnership, or TPP, trade deal.

If you haven't heard much about the TPP, that's part of the problem. It would be the largest trade deal in history — involving countries stretching from Chile to Japan, representing 792 million people and about 40% of the world economy. 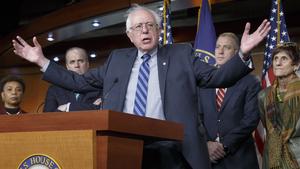 Yet it's been devised in secret, with a disproportionate amount of advice coming from corporations and Wall Street. This secrecy is the norm since NAFTA. Most of the details that are known to the public have come through WikiLeaks. Instead, we'd like to see the negotiating texts made public, so there can be an honest and open debate.

A fast-tracked TPP would lock in a rigged set of economic rules, lasting potentially forever, before most Americans — let alone some members of Congress — have had a chance to understand it thoroughly. If the administration gets fast-track authority, it could hand a completed deal to Congress, which must then vote yes or no, without amendments and little debate, within 90 days.

It would be a grave mistake for Congress to authorize fast-tracking this giant trade deal.

We were both involved in the NAFTA debate — one of us as the leader of a major union, the other as secretary of Labor. No one knew how the agreement would turn out or the full ramifications of approving a trade deal without a full debate. We now know that NAFTA has cost the U.S. economy hundreds of thousands of jobs and is one reason why America's workers haven't gotten a real raise in decades. It and agreements like it have also contributed to the huge U.S. trade deficits. We now import about $500 billion more in goods and services each year than we export.

Following NAFTA with the Trans-Pacific Partnership is like turning a bad television show into a terrible movie. It will be on a bigger screen and cost a lot more money. A few might walk away happy and rich, but it won't be the audience.

This isn't a contest between free trade and protectionism.

Congress should debate whether the Trans-Pacific Partnership promotes the shared values of democracy and prosperity that the U.S. stands for. -

In the first three decades after World War II, “free trade” meant other countries opening their borders to American-made products, and the U.S. opening its borders to their goods. The United States chose free trade, and it worked. Living standards rose here and abroad. Jobs were created to take the place of jobs that were lost. Worldwide demand for products made by American workers grew and helped push up U.S. wages.

But American corporations have gone global, and in recent decades the payoffs from trade agreements have mainly gone to those at the top. Now they make many of their products overseas and ship them back to the United States. Recent trade agreements have protected their intellectual property abroad — patents, trademarks and copyrights — along with their overseas factories, equipment and financial assets.

But those deals haven't protected the incomes of most Americans, whose jobs have been outsourced abroad and whose wages have gone nowhere.

As for the problems with the TPP? What's been leaked about its proposals reveals, for example, that the pharmaceutical industry would get stronger patent protections, delaying cheaper generic versions of drugs.

The deal also gives global corporations an international tribunal of private attorneys, outside any nation's legal system, that can order compensation for lost expected profits resulting from a nation's regulations, including our own. These extraordinary rights for corporations put governments on the defensive over legitimate public health or environmental rules.

The deal would encourage and reward American corporations for outsourcing even more jobs abroad. And it does nothing to prevent other nations from manipulating their currencies to boost their exports and undermine the competitiveness of U.S.-made products.

The administration calls the TPP a key part of its strategy to make U.S. engagement in the Asia-Pacific region a priority. It thinks the TPP will help contain China's power and influence. But the trade pact is likely to make giant U.S. global corporations even more powerful and influential. White House strategists believe such corporations are accountable to the U.S. government. Wrong. At most, they're answerable to their worldwide shareholders.

At a time when corporate profits are at record highs and the real median wage is lower than it's been in four decades, most Americans need protection — not from international trade but from the political power of giant global corporations and Wall Street.

Congress should debate whether the Trans-Pacific Partnership promotes the shared values of democracy and prosperity that the United States stands for, as well as sets high standards for countries such as China to follow. Or whether it merely speeds the global race to the bottom.

If it's the latter, Congress should be able to change it, not act as a rubber stamp on agreements negotiated in secret. It can start by not fast-tracking the Trans-Pacific Partnership.

Robert Reich was secretary of Labor in the Clinton administration; Richard Trumka is president of the AFL-CIO.