This year’s conference encouraged multi-trade engagement, where tactics are shared and discussed in both large groups and small forums.

NABTU held its first Apprenticeship Conference at Washtenaw Community College in Ann Arbor, Mich. in 2016. The goal was to gather all of the building trades’ Training Fund Administrators and selected Local Union Training Coordinators to collectively learn from each other and discuss ways to improve and enhance the construction workforce.

This year’s conference, again held at Washtenaw, began with Chris Haslinger, Training Director for the UA, recognizing all of the trades and Training Fund Administrators participating in the conference. Sean McGarvey, NABTU President, then welcomed over 150 attendees and discussed the impact of the building trades on the economy, including more than $1.2 billion spent at 1,600 training sites throughout the country.

“Our apprenticeships and training are what set us apart,” he said. “There is a bottom line, the nation’s economy needs a trained workforce. Thank you for your commitment to training the next generation of our industries.”

“Every student out there deserves counseling about his or her career goals,” Acosta said.

Acosta also discussed the impact of Building Trades training on the economy, which is in excess of $10 billion. “You have the grit to train your own; you have the grit to grow your own.” Acosta concluded with, “this conference shows that you are committed to growing your apprenticeship programs. You are the men and women that built America.” 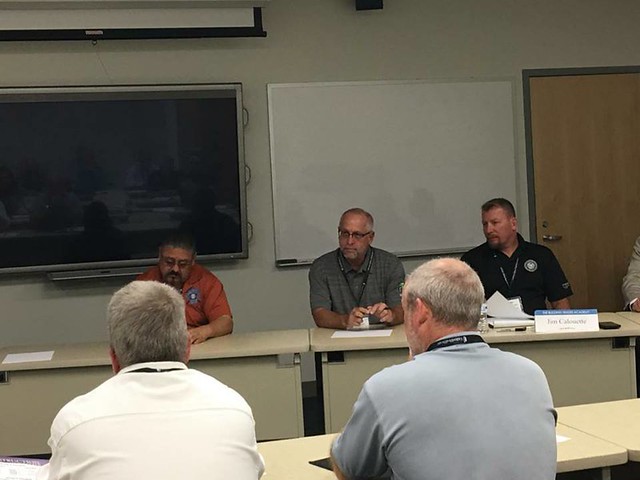 The conference took on a different format this year, with breakout sessions formatted to address six different topics
as opposed to the whole-group, general sessions that were held last year.

Other breakout sessions included: Health and Safety Updates, Implementation of Online Learning in Apprenticeship Education and Training, Marketing the Trades, Reaching out to Schools/Students/Parents/Veterans and Soft Skills.

The Soft Skills session discussed attributes and personal skills that a member of the workforce needs to have to interact effectively with other people, specifically on the jobsite and within a Local Union. Two Insulators served as featured panelists during the sessions.

Terry Walsh and Billy Hodges discussed the soft skills needed in the building trades, specifically in the Insulators Union, and how they are trying to help apprentices in Local 1 and Local 16 respectively, be successful in learning and practicing these needed skills.

A drawing held during the event awarded one participant with a new pair of Thorogood boots. Walsh was drawn as the winner. To continue with the promotion of apprenticeships, Walsh said he plans to give the boots to a Local 1 Apprentice who attended the NABTU Women Build Nations Conference held in Chicago in mid-October.

The Apprenticeship Conference concluded with Haun and Training Fund Administrators from other building trades on the stage fielding questions about how to continue the growth of the NABTU program.